The East York Atom boys continued their dominant season on the weekend of March 25-26 in Guelph, Ontario. After going undefeated in the Ontario Basketball League for the season the team did not drop a single game en route to the Gold Medal by defeating the Guelph ‘A’ team twice in the process, including in the final game!

Good luck to the boys as they strive for another medal at the Provincial Championships in Windsor March 31 – April 2nd, where they are likely to meet their “arch nemesis”, the Guelph ‘A’ team, who will no doubt be hungry for redemption. 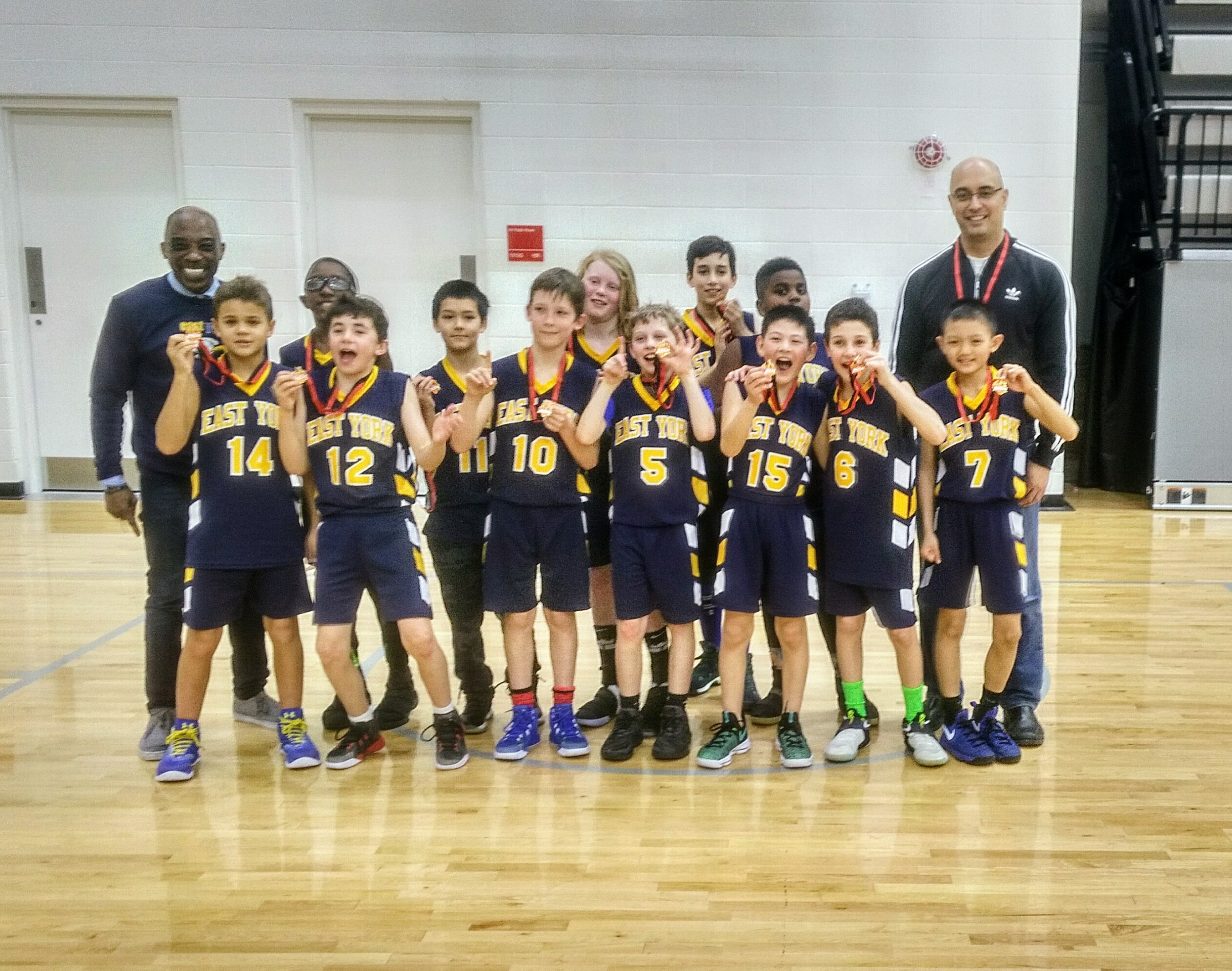 Congratulations to the U12 East York Girls Major Atom Basketball team for winning the Division 1 Bronze medal in the March 24-26 Provincial Championships in Newmarket.  The team went 3-1 & captured the bronze with a score of 28-26 over #1 ranked Transway. After finishing their Pool play by going 2-0 with victories over Windsor (44-27) & Stoney Creek (26-23), they lost a tight game against Welland but rebounded against Transway. 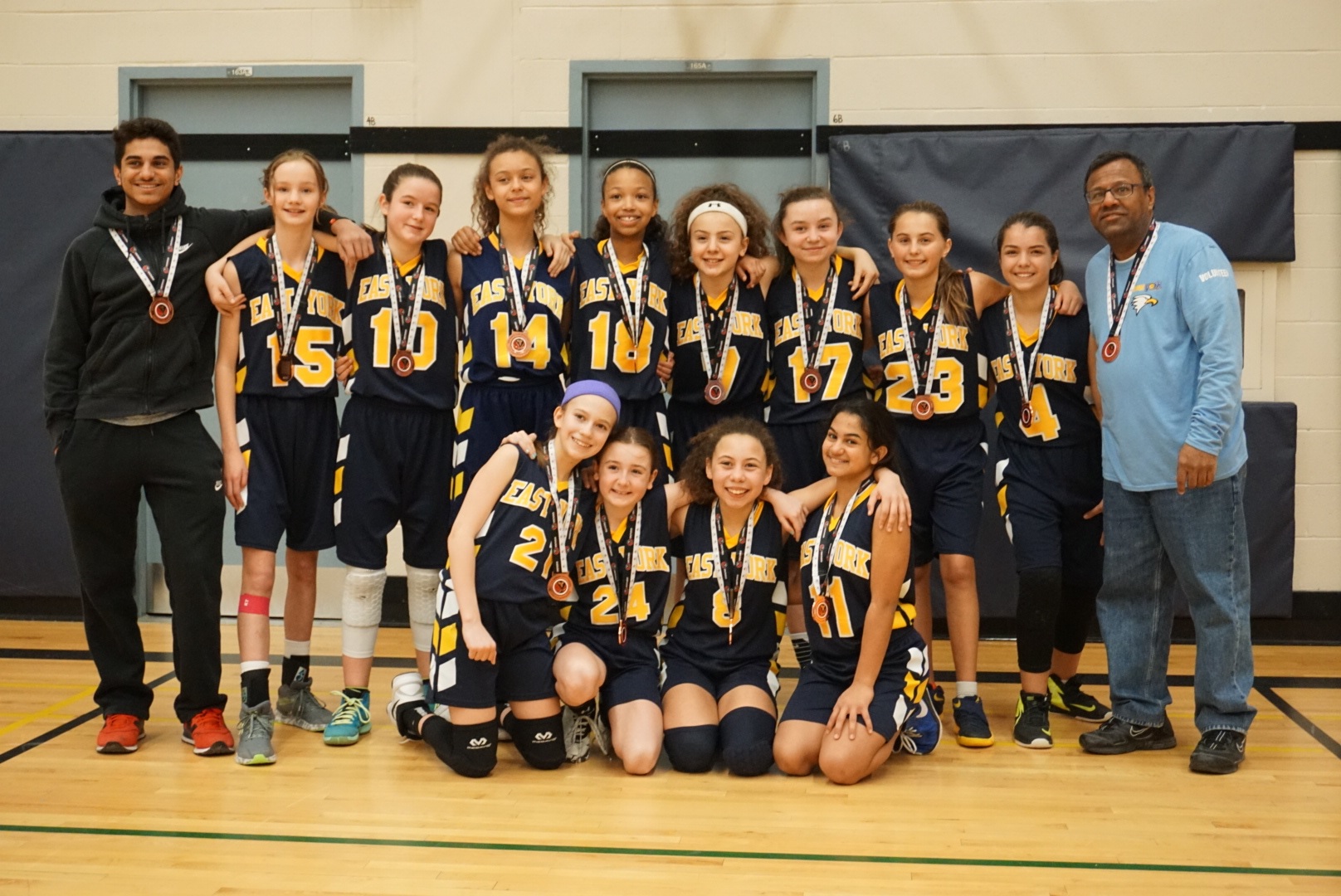 Congratulations to the Major Atom Girls who went undefeated at the Barrie Royals Invitational Tournament, February 24-26, 2017.

After going 3-0 in pool play, they defeated the host team 49-18 in the Semi-Final.  In the Gold Medal Final, they battled Guelph CYO to a 33-23 victory for the championship. 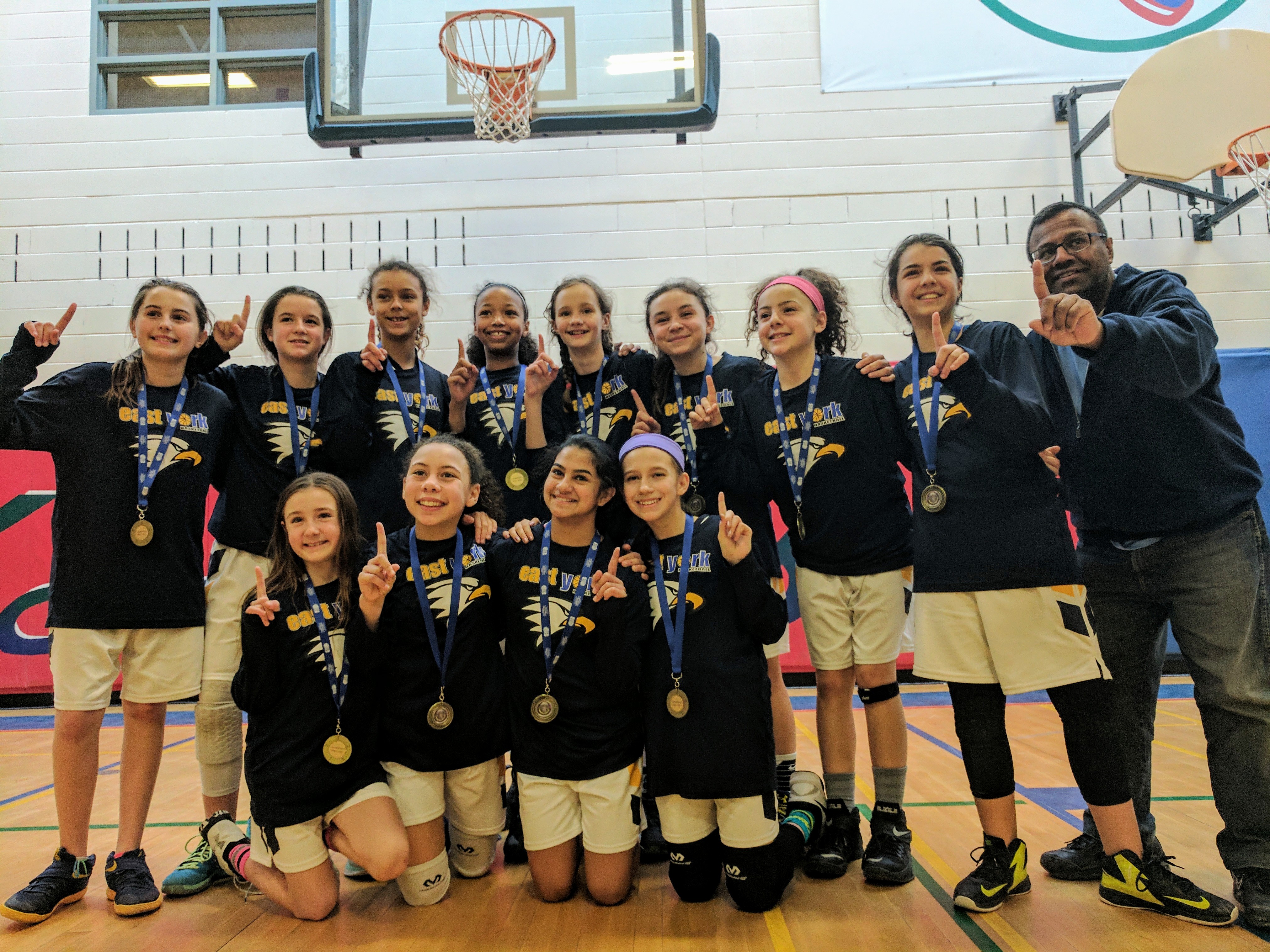 Congratulations to the U12 East York Girls Major Atom Basketball team for winning the MUMBA Tournament in Markham on Sunday, January 15th, 2017. The team went undefeated @ 4-0 & captured the championship. 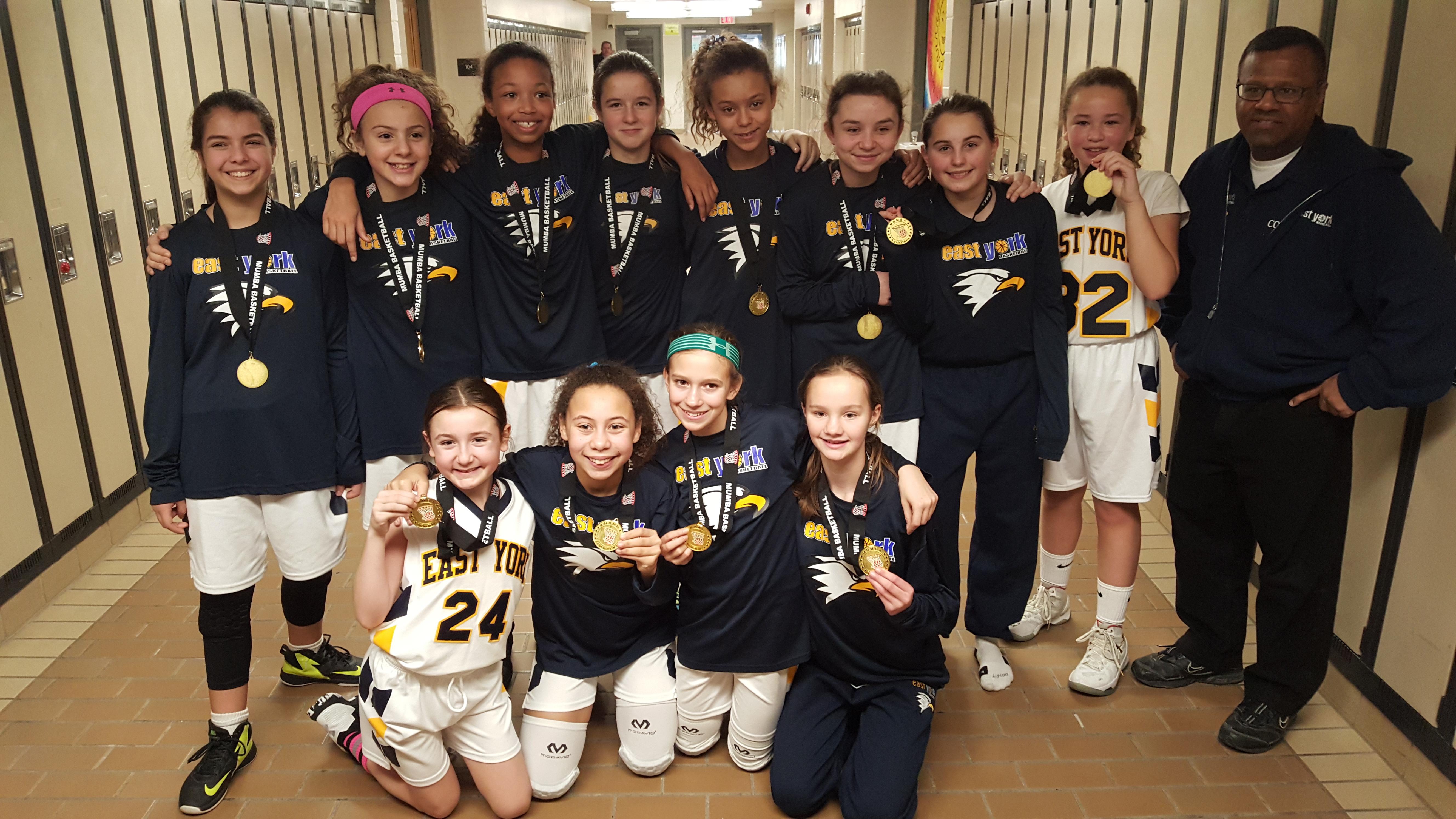 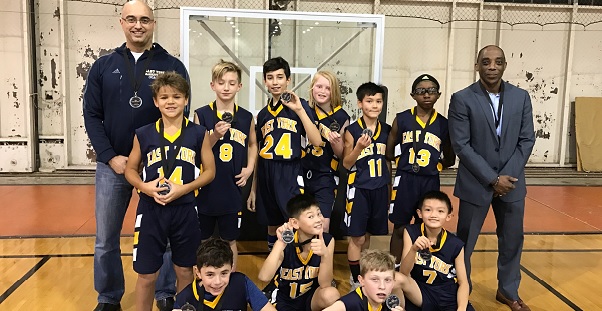 After compiling a 2-1 record in pool play the East York Atom U11 Boys team defeated Sudbury Jam 47-41 in the Semi-Finals to punch their ticket to the Gold Medal game. Unfortunately, the squad lost a close game to Ottawa Next Level 42-30 after being down by 4 points heading into the last  shift. Congratulations to the boys on a great effort and it looks like they are already firing on all cylinders as the second half of the season opens up after the Holiday break!

The draw for the 55″ Sony UHD 4K TV was held in support of the fundraising efforts of the U13 Boys Bantam Rep team on Wednesday, December 21st. The winning ticket number was 197 and the winner has been notified.

Thank you to everyone who supported the team through the purchase of a raffle ticket! The team raised over $3000 dollars, which will go directly to programming for the squad in the form of tournament entry fees, gym permits, exhibition games, etc.

The team is very appreciative of the support!

The East York Bantam Boys are fundraising this year with one big awesome prize up for grabs! The draw is just before the Holidays so get your ticket(s) and one lucky winner will go home with a terrific present for either themselves or a loved one.

All proceeds go to support the boys! 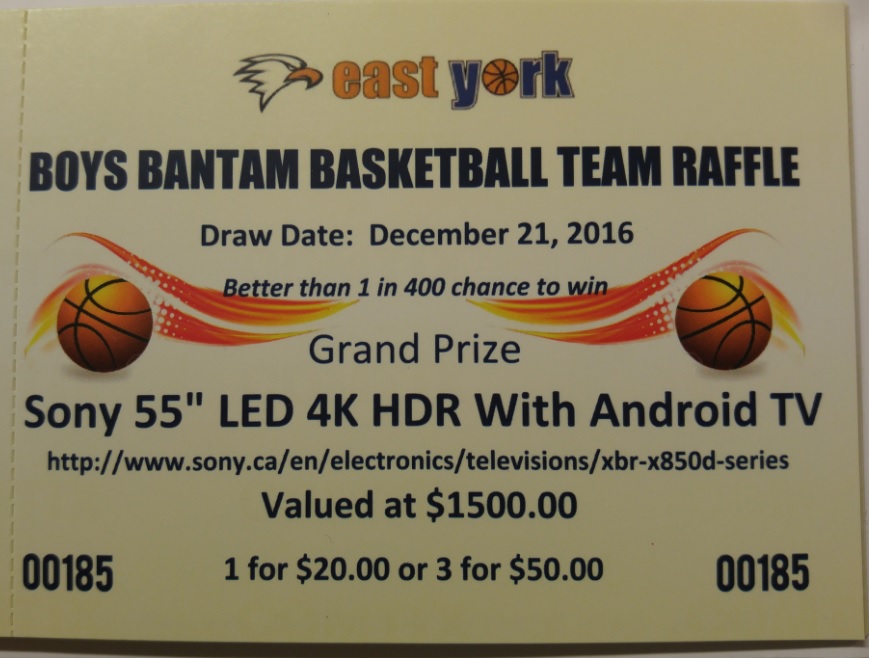 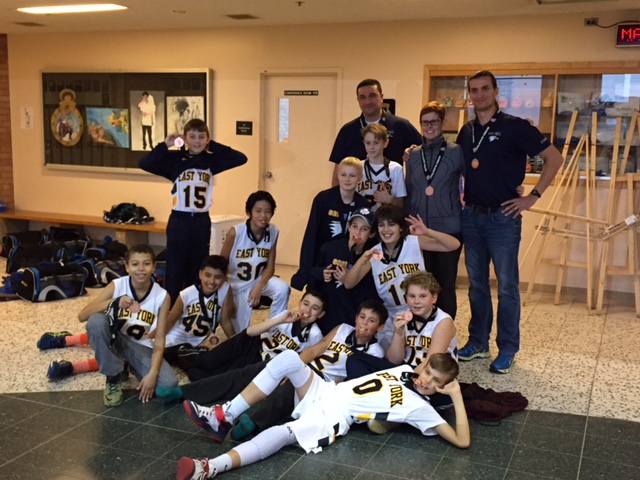 The East York U13 Bantam Boys won a hard fought Bronze Medal at the MUMBA tournament over the weekend of December 3-4, 2016. This was a true team win as every single player contributed to the overall success both on the scoresheet and in other ways, which often are more difficult to see, but more important.

The weekend started with a close win over the Woodbridge Lions, who made the game a real test and took it right to the end, eventually succumbing to the full-court pressure in the last two minutes of the game. East York won 36-31.

Then, it was a very short turnaround as the team had to make its way to another location and start their second game, this time against the Thornhill Thunder. The boys played valiantly and the score was 22-21 at the half for Thornhill, but then the squad ran out of gas and eventually dropped the decision 49-34.

Entering play on Sunday morning, East York knew what was at stake. A win over the MUMBA Shariff team and a trip to either the Bronze or Gold medal game immediately afterward. A loss, and a long wait for the fifth place game was the reward as that game wouldn’t start until 6:30pm. The squad came out strong and built a 13 point lead through 3 quarters, but then the MUMBA team scratched and clawed their way back to make it a true battle until the final buzzer. Ultimately, the boys prevailed and won 57-55.

In the Bronze medal game the team once again faced Thornhill. This was a shot at redemption and the team really put it all together. It was a game in which East York maintained a slim lead from the start only to see it evaporate when Thornhill took a 38-37 lead midway through the 4th quarter. However, Easy York was resilient and under constant full-court pressure maintained their composure and squeaked out a great 47-45 win and took home the hardware. 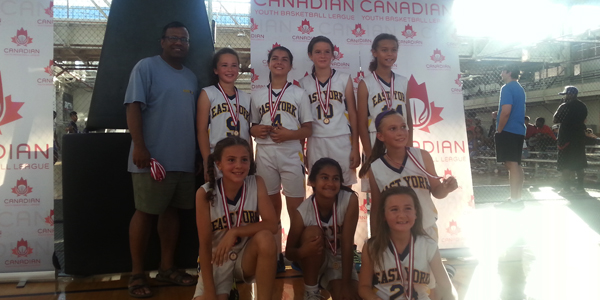 “After going 6-0 in league play, the Atom Girls team beat Triple Balance 37-9 in their semi-final.  For the final, they played a Tri-County team from Guelph and won 37-11.  A well-earned victory for the girls which completes a very successful season.” 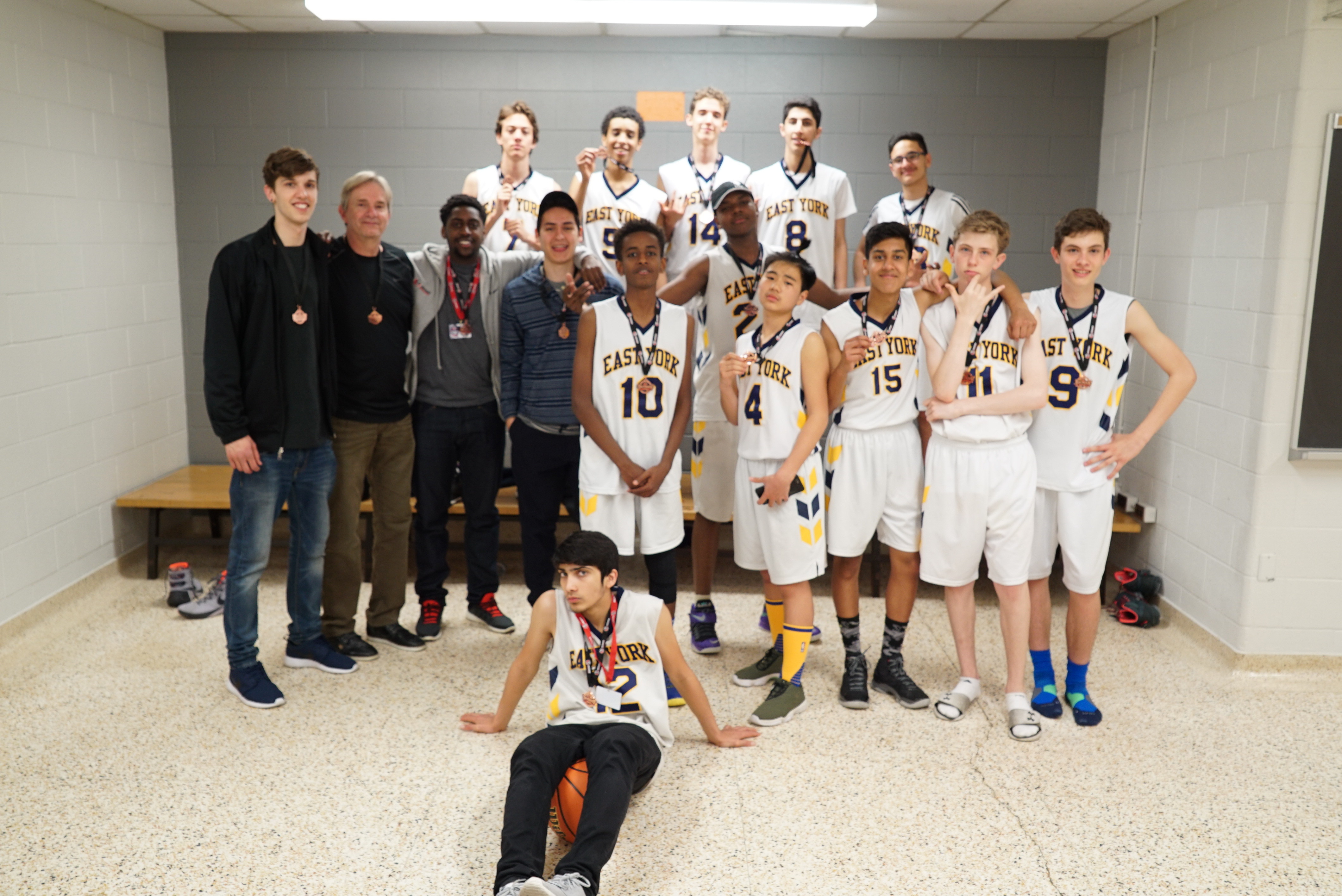 Niagara Falls wasn’t the only thing that was wet over the OBA weekend – the EY Midget Boys were raining 3s, dishing dimes, sweating up a storm, having fun, and making their parents both happy and nervous in the process!

In the first game on Friday night the team faced Ancaster and played well in the early stages. They took a good lead into the fourth quarter only to see it whittled away by their opponents as the period progressed. The Ancaster team tied it up late, and EY had the ball and a chance to win it outright with seconds left, but the crowd was in for a treat as the boys would have to go to overtime to decide this one. And one OT period would not be enough, as it turned out! In fact, the boys needed an unbelievable put-back buzzer beater play to take the game into a third OT frame! Once the third OT period started the boys decided it was time to get’er done and pulled away for a well deserved 85-72 victory. Whew!

Saturday’s first game pitted the lads against Brantford Rep #1 and, once more, the team focused on defence and pulled ahead as the game progressed. But, as in the first game of the tournament, playing not to lose rather than playing to win would make things more interesting than perhaps the crowd felt was necessary. From the 6:40 mark in the fourth quarter on the team only managed one point and we were off to OT again tied 44-44. The OT was a defensive battle as each team had trouble scoring, but a critical 2pt FG in the last 30s of play allowed the team to squeak out a narrow 49-48 victory. The crowd had more than a few cardiologists on speed dial towards the end of that one readying themselves for the call…

The last game of pool play would decide which team would have the chance to play for Gold as the boys faced off against Orillia. Both teams had 2-0 records coming into the contest and, as was their pattern, the boys pulled away in the first three quarters and lead by as much as 12 points in the second half. However, the Orillia team was carried by some unbelievable shooting from beyond the arc and a few treys that hit the front of the rim and still went in to tie the game late and, you guessed it, put the game into OT. In fact, Orillia pulled ahead late and EY needed a late basket to tie the game just for the opportunity to play the extra frame! Unfortunately, the boys showed courage and guts after so many stressful situations, but ran out of gas and lost the contest 60-53 in the end to book their ticket to the Bronze Medal game on Sunday.

The coaches and the team decided that the parents had finally had enough from a heart health perspective and in the Bronze Medal game played their most complete game of the entire year. Turnovers were kept to a minimum, the defence was focused and intense, the ball was shared like a bowl of Cherios at a preschooler convention, and the shots all seemed to find nothing but net. Even when the team from Oakville made a bit of a run in the second half to pull within 10 the boys never panicked and went on a run of their own in the fourth quarter to seal the deal with a final score of 85-65. What a great way to end what was a huge season for all the athletes! The progress from day one to the final buzzer was huge! Head Coach Leo and Assistants Liam, Luke, and Malik did an amazing job of guiding the team throughout the year and making this a truly memorable experience for everyone. Congratulations!