Congratulations to the East York U17 Boys team on winning a Gold Medal at the MUMBA tournament, held in Markham on February 23 and 24, 2019.
It took four straight wins to capture the title. All of the games were hotly contested and came down to the final quarter before being decided. Saturday saw the boys play 2 pool games. Game 1 against the Ancaster Blitz really went down to the wire. A back and forth affair ended with East York hitting 2 clutch free throws with 0.8 seconds left to come away a 53-52 victory. Game 2 against the KW Vipers was similar in many respects. It was a one or two possession game throughout most of the 4th quarter, but East York never gave up the lead and scored a couple of late baskets to prevail 56-51. That left the team 2-0 in pool play and ready to head to the semi-finals on Sunday.
Another nail biting game on Sunday morning against MUMBA saw East York storm out to an early double digit lead. However, the host team dug in and made it close late in the third quarter. Our Eagles kept their resolve, never quit, and pulled away in the fourth quarter to finish with a 73-56 victory.
The Gold Medal game saw East York face the ABA Knights, a team that had our number at a HoopDome tournament the previous year. Much like the two Saturday games, this game went back and forth in the fourth quarter. A 3 point shot from the Knights with just under a minute to go gave them the momentum and the lead. But again the Eagles wouldn’t accept defeat, and came back with a 3 pointer of their own to regain the lead. From that point on, East York never looked back, generating a couple of late turnovers and fast break baskets to come away with a 57-51 victory in the end.
Again, congratulations to all of the players who worked hard throughout the weekend, and really came together as a team. Also, the large contingent of parents, family, and fans that showed up to cheer us on really made a difference. This tournament represented the kick-off to the season, and it couldn’t have gone better. The team is looking forward to the rest of it’s upcoming games and hopes to win more medals.
Coach Jon

Congratulations to the Atom Boys for capturing the gold medal in the 2019 Brantford CYO Paul Mitchell Invitational tournament (February 22-24). The boys had a great weekend and playing their first overnight tournament of the season helped them to bond as teammates. Wins against Burlington Force and London Ramblers, as well and a close loss to Ancaster Magic, put East York in the semi finals vs York North Avengers. East York played their best game of the season and roared to a 61-33 victory securing a spot in the finals vs the host team, Brantford CYO.  The championship game saw both teams playing hard. East York was able to hold off a late run by Brantford CYO to take championship game with a score of 53-45. Congratulations to all players. The coaching staff is proud of their efforts, dedication and hard work.

The East York Major Bantam Boys U14 team brought home the Bronze Medal in their Division at the Ontario Basketball Association Provincial Championships, which took place April 20-22, 2018. The tournament was a worthy celebration of the effort and commitment that the athletes put in starting way back in September, 2017! After many months of work, and a total of 41 games played, the boys really earned this medal. The coaching staff is very proud of our athletes for this terrific achievement! 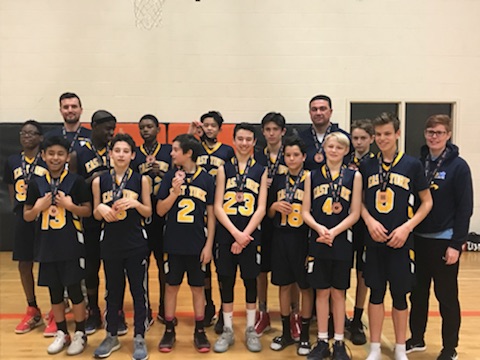 The competition started on Friday, April 20th with a big win over the Basketball World Toronto Rebels: 80-50! The team really came together and worked as a cohesive unit starting on the defensive end, which translated to success on offense. Every single player made a contribution and, in a unique outcome, every single player scored!

On Saturday, April 21st the boys faced two very tough opponents. In the first game against Thornhill Thunder – Mike the boys were tested by a very tenacious and fast team that seemingly would not be denied from behind the three point line and one that pressured the ball in the half court relentlessly. After a tie through 3 quarters Thornhill pulled ahead and won the game 57-48.

Also on Saturday, April 21st, the team faced the Caledon Cougars and, once more, a terrific and competitive game ensued. after racing out to a 8-2 lead early in the game and forcing an opponent’s time out, the boys found themselves once again in a tie through 3 quarters. The relentless pressure from Calendon again proved to be the difference and East York ended up on the losing end of a 67-53 score.

However, sitting on a 1-2 record after pool play did not immediately relegate East York out of medal contention. When the Rebels scored an upset victory over Thornhill in the last game on Saturday, East York was through to the Bronze Medal game based on a three way tie break due to point differential. That 30 point win on Friday evening proved to be very important indeed!

On Sunday, April 22nd the team faced Gloucester-Cumberland Wolverines, who also made it through to the game after a three way tie with a 1-2 record in Pool A! This time the boys were not to be denied and played another complete game where every single player contributed on both ends of the floor, and my cheering and supporting teammates from the bench, for a worthy finish to the season with a 59-47 victory!

Congratulations to the athletes and thank you to the parents who cheered vociferously throughout the weekend, to the detriment of their vocal chords. It was worth the effort! A big thank you to everyone from Coaches Vava, Nick and Kari for your support throughout the entire season. Special thanks also to Coaches Jeff and Mark for stepping in to help in the absence of Coach Vava while he recovered from an unexpected mid-season injury.

Congratulations to the Bantam Girls who captured the championship at the Buffalo Storm AAU Invitational Tournament, March 24-25, 2018.

After going 3- 0 in pool play, they defeated the New York Panthers 41-28 in the Gold Medal Final for the championship. 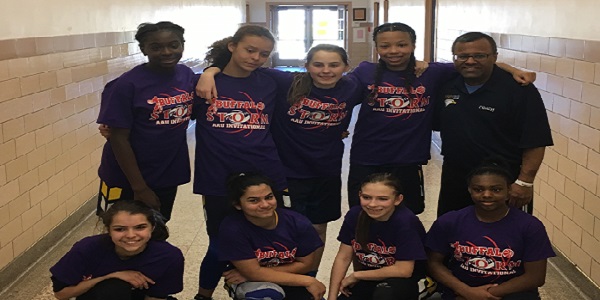 Congratulations to the East York Bantam Girls who captured the championship at the OBLx Tournament, March 17-18, 2018.

The knockout style tournament concluded with EY defeating the Vaughan Panthers 42-39 in the Gold Medal Final for the championship.  This solidified their #1 ranking going into the Provincial Championships. 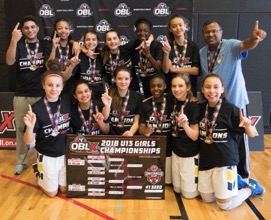 Congratulations to the East York Novice Boys U10 team for winning the Gold Medal at a tournament in Guelph Ontario! Way to go team and coaches! 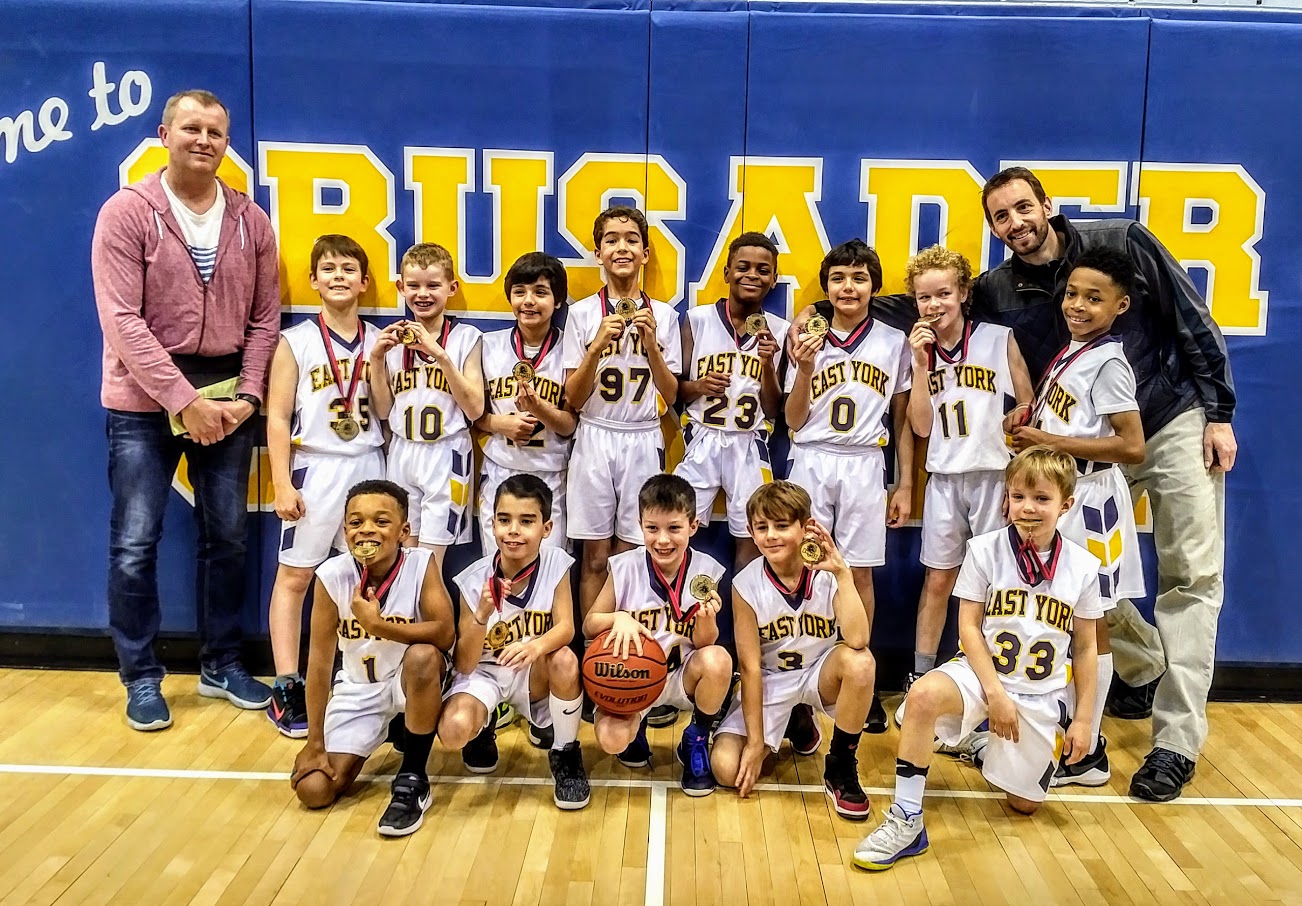 Congratulations to the Bantam Girls who captured the championship at the IEM Tournament, January 13-14, 2018.

After going 3-1 in pool play, they defeated Guelph CYO 43-26 in the Gold Medal Final for the championship. 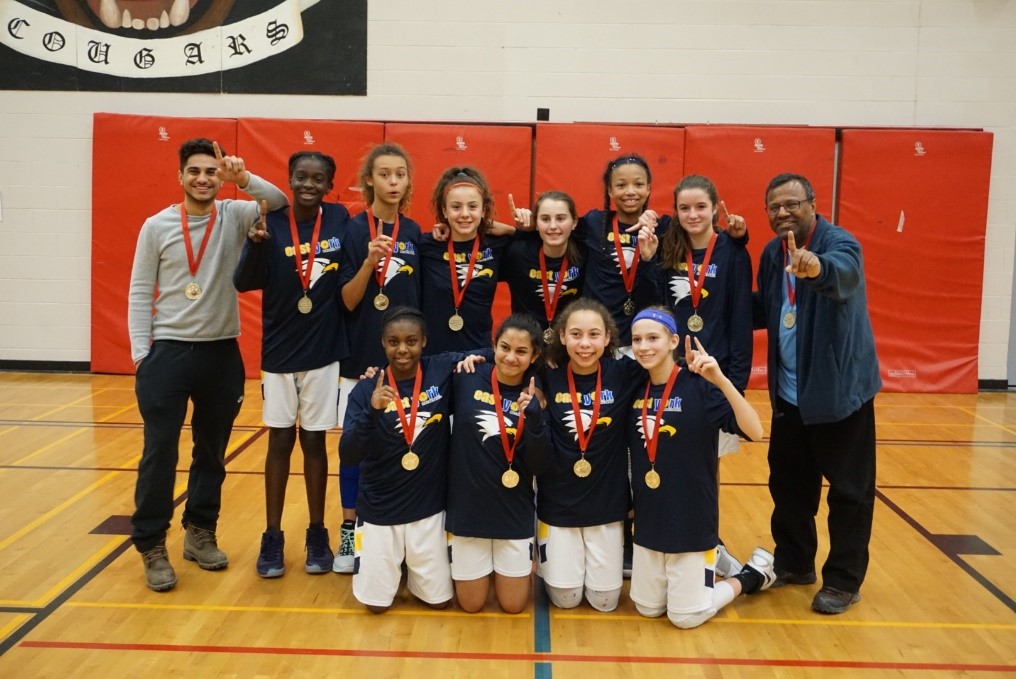 The Bantam Girls team were out helping by participating in Community 55’s local food drive.  Hard work, but a great & rewarding time had by all. 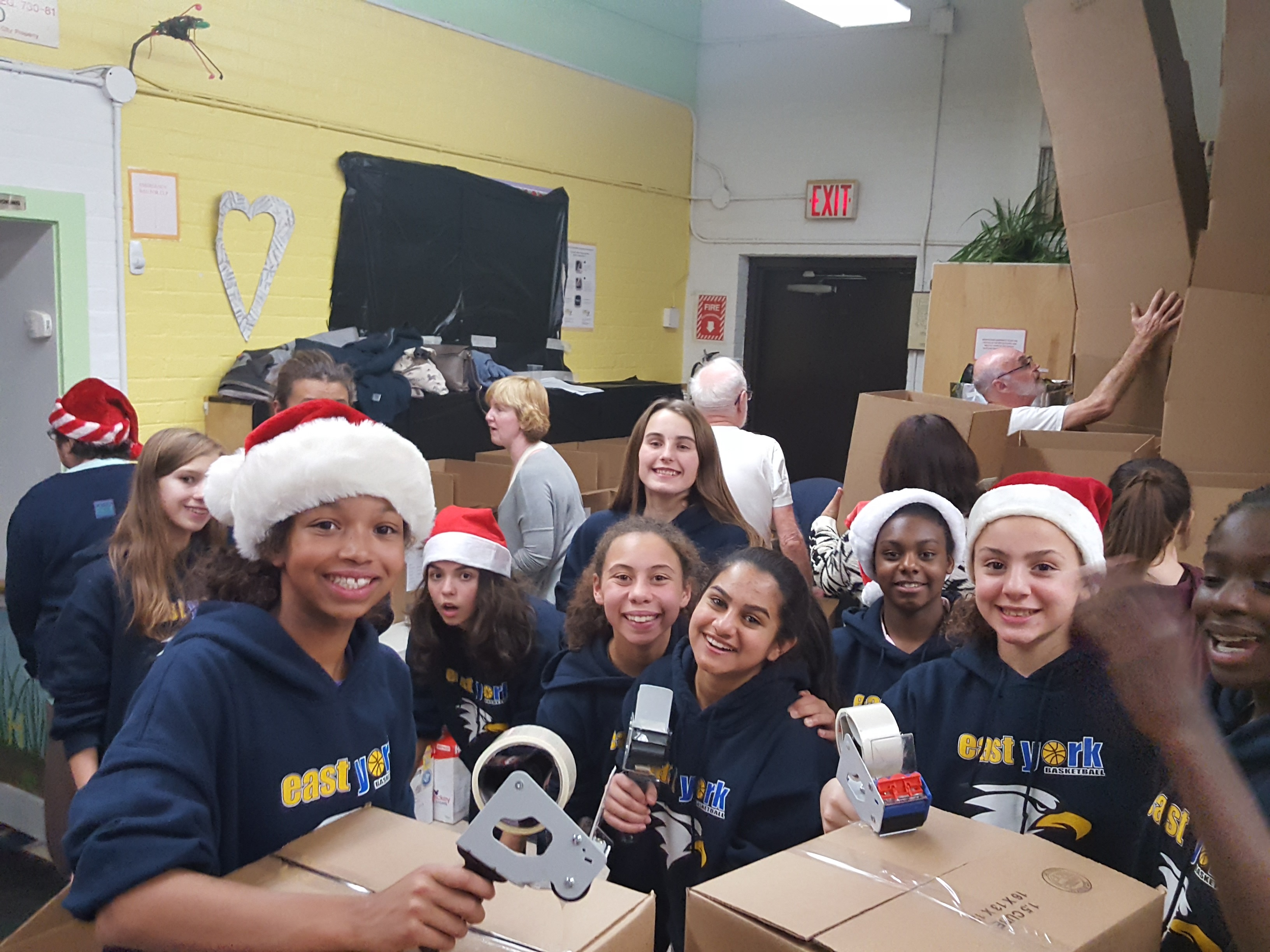 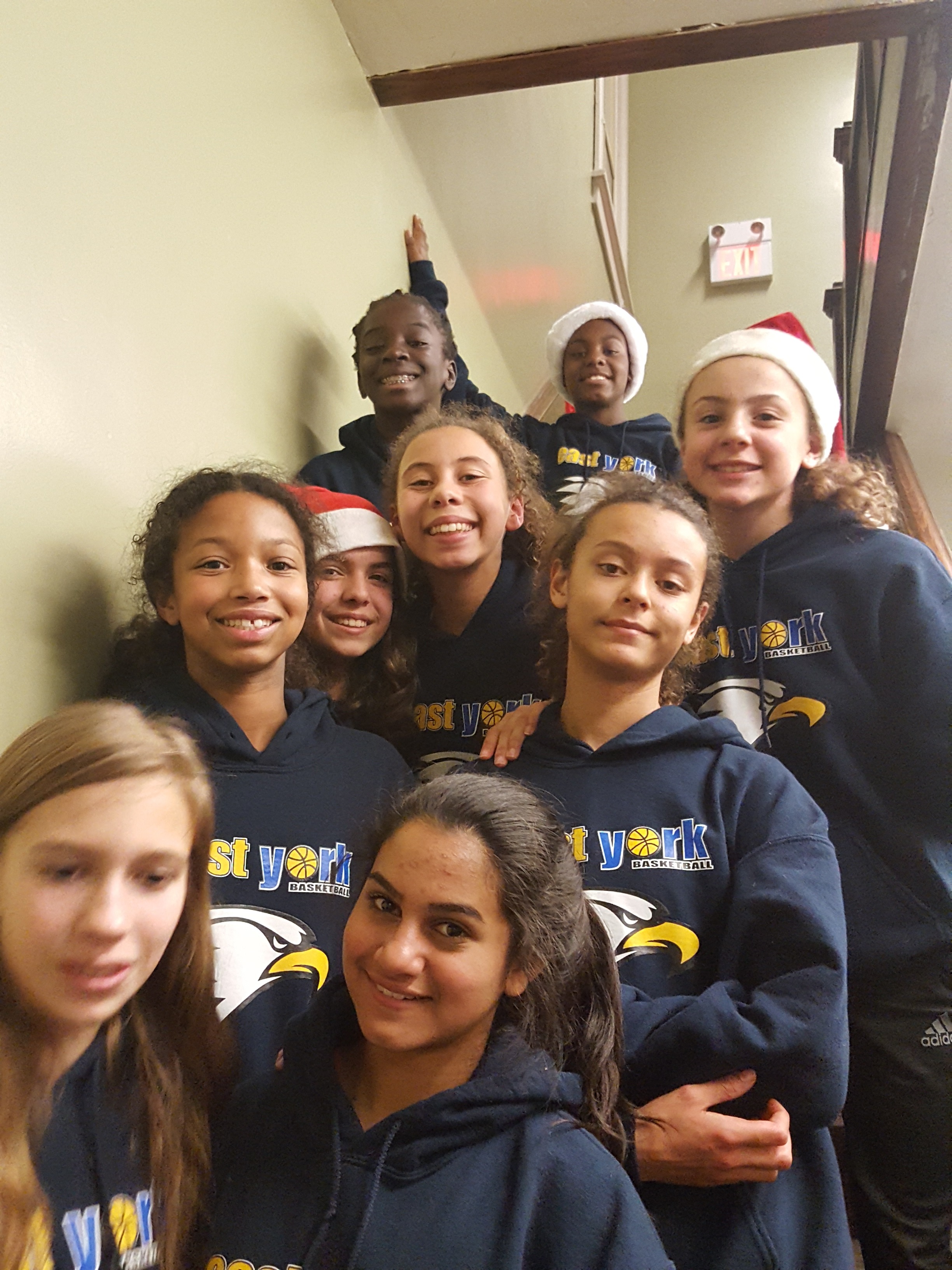 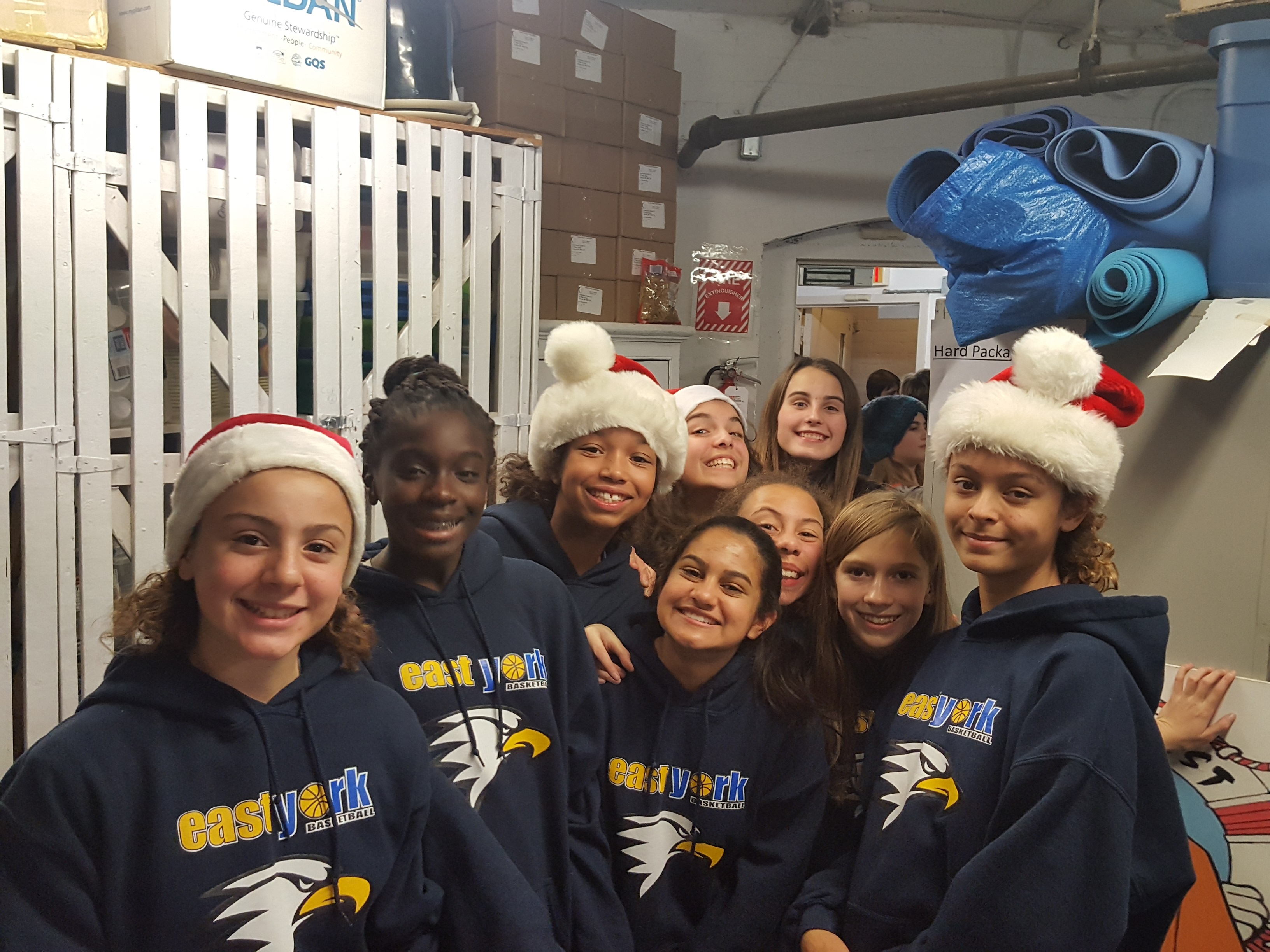 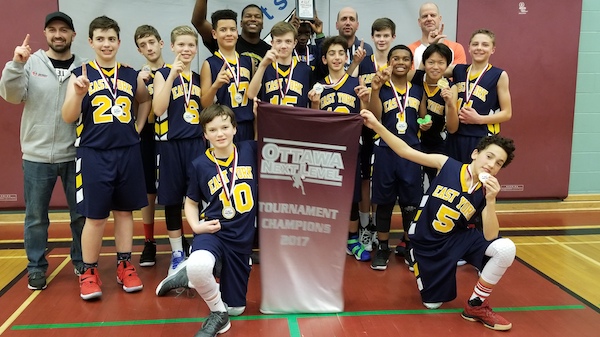 In the opening game, the boys used a strong second half to turn a one-point lead into a 21-point victory over the Ottawa Shooting Stars. Theo Steube’s strong point guard play earned him Game MVP honours in the 52-31 win.

The second game saw the team succumb to a difficult pressing defence from the Gloucester Wolverines. Theodore Hristakis was named Game MVP after aggressively attacking the hoop throughout the 69-59 defeat. The boys bounced back on Saturday evening to hand the host KYBA team a 74-70 loss, earning their way into the medal round.

With the Gatineau Phénix standing between the team and a spot in the gold medal match, the Eagles controlled the game from start to finish on their way to a 63-40 win. An 18-point opening quarter saw Steube, Kayron Shaw, Jorden List and Matthew Rahal score at least two baskets each.

The gold medal game provided another shot at the Gloucester Wolverines. In a tightly contested match that saw the score tied after each of the first three quarters, the boys pulled out a close 58-52 victory. The front court combination of Shaw and Jeff Fan scored 16 points each. Shaw also captured tournament MVP honours based on his great play at both ends of the floor.

Congratulations to the boys for turning their hard work into hardware! At some point this past weekend, every player hit a shot or was involved in a defensive stop that led to the gold.

The East York Bantam Boys U13 team played at the MUMBA tournament over the weekend of April 8-9, 2017 in preparation for their provincial finals (April 21-23, 2017) and came away with a Bronze Medal for their efforts!

The squad used the tournament as an opportunity to practice and fine tune their play, but also to allow all players as much time on the court as possible in celebration of a long season. In the first game the team faced a familiar foe, Toronto Lords, for the fifth time. Having won all four of the previous meetings EY was ready for a motivated and much improved Lords team, but played a strong team game on both offense and defense to take the win with a score of 55-42.

In the second game the rotation for the team changed quite a bit and the boys faces a formidable home team, MUMBA Gbas. This game was a good reminder that a consistent effort on both sides of the ball for four quarters is necessary to secure a win and the boys were somewhat humbled to take a loss 66-36.

However, the team regrouped for a third game on Saturday against a determined Motion Basketball Bantam team. This was as scrappy as game as one will ever find and it was good to come out on top in what can be characterized as an “ugly” win by as score of 34-31. In that game, having taken a 18-6 lead after the first quarter, EY let their advantage slip away and trailed 28-27 late in the fourth only to show resolve and come away with the win.

In the fourth game of the tournament on Sunday morning the team faced another local squad, MUMBA Shariff. Having gone two for two in previous games against this team, with the first game coming down to the wire in a 57-55 victory for EY, the boys played consistently for all four quarters and were not rattled by any mishaps to take a solid 75-50 win and the Bronze Medal overall.

Congratulations to all and good luck in Milton at the Provincial Cup! 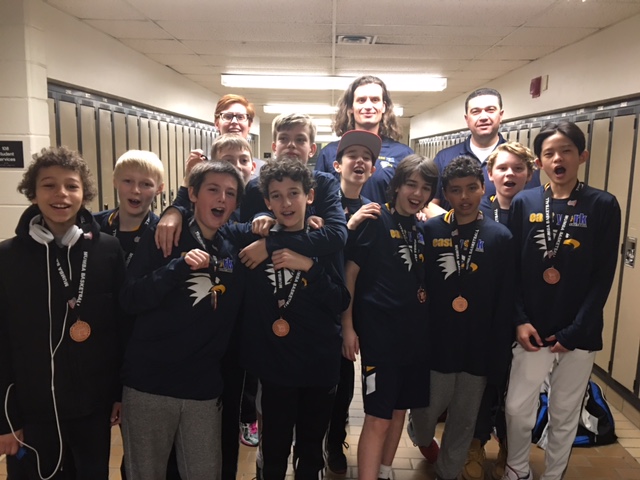 Read More
12Next
Go to Top