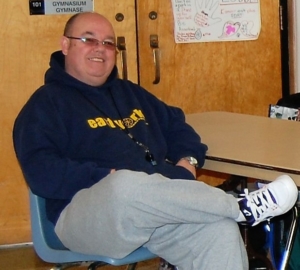 Starting from September 2006 and spanning more than 10 years, Darrel Ryce would take the short walk from his house, wearing shorts, to Cosburn Middle School to coach the Saturday House League. In the early years his daughters Alison and Nicole would join him to participate in the program. He would be there promptly at 9:00 to help with the Tyke program and then return for the Atom and Bantam sessions.

Darrel had a great knowledge of the game, but his greatest asset was his ability to interact with the participants; coaching, mentoring and promoting camaraderie. He made learning and playing basketball fun, through creative drills, competitive scrimmages and silly team names. He had a special way of relating to the younger girls which led to him organizing all-girl teams to take on the boys. Many of us have a memory of the girls giggling as they ran down the hall between gyms after warmups yelling their team name – The Flaming Cupcakes.

There is no doubt that Darrel is responsible for many girls continuing to play basketball through school and contributing to the sporting community later in life.

In Darrel’s honour, annually the East York Basketball Club awards a scholarship to a deserving EYBC participant that was active in the EYBC house league program, demonstrated a joy for the game of basketball and looks forward to be a positive role model in the community.